Why You Should Be Against SOPA 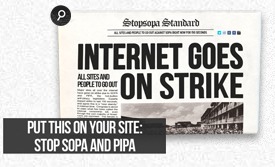 If you are not aware about SOPA (Stop Online Piracy Act), it is a new bill that is being debated whether it should be implemented or not. SOPA removes the freedom from the internet which threaten the reason why internet exists . Click here to learn more about SOPA.

How to help stop SOPA?

STOP SOPA AND PIPA! ACT NOW AND PROTECT THE INTERNET FREEDOM!
Join thousand of websites that is against SOPA/PIPA such as Google , Yahoo, Wikipedia, Mozilla, Reddit, Tucows, Craiglist, WordPress ,Tumblr, Vimeo,Flickr and many more.